In 3 short years, Anghami grew to 50 employees and 15 million users. Based in Lebanon, Anghami quickly became the biggest and hottest startup in the Middle East. I joined a few months after Anghami was founded, and experienced a tough journey to reach where we are today. Here’s a few things I went through along the way.

I witnessed the team grow from 8 to 50 colleagues

A lot of things happened as the team grew. The management process automatically changed as the iOS team evolved from one remote iOS developer to an in-office developer to a team of 4 developers. It was energy consuming to get on board 3 interns and 2 full timers who all joined within a week. I learned not only how to manage a team, but several teams, and to connect teams together. Each person has to be treated differently. And, while decisions keep changing, no one’s work should go to waste. I learned how to balance between what drives the business forward and what is good for each individual (which also helps drive the business forward).

I grasped the difference in working with people who are really passionate about the app and those who don’t give a damn. The passionate and talented ones are really interested in making things happen and making sure they’re done well. On the other hand, one ineffective colleague can drain the team, and the morale became better when they left the company.

I felt the impact of company outings on individuals’ enthusiasm. The whole team having fun gently reminds us how happy we are to work together.

The team grew because of the milestones we reached. I remember well when we celebrated reaching a million users (we’re at 14 million now), opening a second office (we have four now), and having artists like Elissa and Lady Gaga talk about Anghami. We celebrate and give credit to the team for all these small successes that have gone into making Anghami the standard reference for music.

It turned out that it’s good to have a rough tough boss always pushing me forward and out of the comfort zone.

A lot of effort and deep thinking is needed to release the app on a deadline. It’s really easy to delay the deadline, for months. I learned how to atomize, prioritize, and iterate. An interesting lesson is that coherence among everyone’s work is more important than doing what’s right. The team has to be aligned. I learned that waiting for perfection is imperfect.

There’s always differing opinions in the team about anything. Someone wants a feature dropped, another wants more of it. It’s important to consider everyone’s valuable thoughts, but without entering an infinite loop. At the end I have to come up with something that is simple, usable, and makes people happier.

I learned the power of music

People are emotional when it comes to music. They throw rants on Twitter for giving them the wrong song and tweet love when Anghami delivers an hour of good music. I worked on meeting the needs of Anghami’s audience without changing our essence.

Most of my family, friends and even random people that I meet know Anghami. Everyone actively tells me what they like in the app and what needs improvement. It is truly rewarding to work on a product that everybody understands and uses.

I learned how features should be obvious. Everything should be out there. Hiding a feature inside a tab essentially kills that feature. Buttons should be clear.

I learned how to juggle many tools, especially when it comes to analytics and finding information. I quickly honed the skills needed to manage an app as popular as Anghami, like project management, database querying, analyzing mobile and web behaviors, email delivery, monitoring crash logs, using marketing tools, and reviewing push notifications.

The way things evolved during the past few years was very overwhelming, and one time I told a friend that I feel under qualified for my job. Turns out it’s a normal feeling when I’m learning plenty and expanding my mind in different ways. Passing through hard times was worth it because I was able to challenge myself, grow, learn and adjust to the ever-evolving work environment.

Ghobrial has over twenty-five years’ experience in building brands from source to leading positions. Throughout her career, Ghobrial has...

Stereotypes say that the tech world is a man’s world, and while you debate whether that’s right or wrong,... 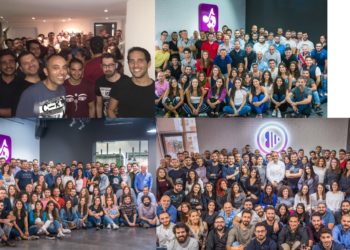 Today marks my 5th Anghamiversary.. I wanted to be intentional about how I celebrate and reflect on this milestone...

How to Market your Music Talent