The phrase content is king never gets old, because story telling is an eternal art, in any form that it comes in, text, video, audio, or theatrical, content will always remain to be king as it is with stories that people connect. Some stories more than others.

While Content is King was a great punch line in some presentation, there must be a bigger story. King of what? and is there one King? The Cinema platform can hold a 2 hour story, what is performed at an Opera house cannot live on the streets, and while 5–10 minutes is the norm on YouTube, 1 Minute is the norm on facebook, 15 seconds on Insta Stories, and 6 seconds on Snap. In that context, I believe if content is king, the platform it lives on is the kingdom for which content is king. To every kingdom it’s culture and norms.

My objective of this blog is not to discuss the map of kings and kingdoms and the empires, but to focus on one kingdom in particular, and that is the music kingdom where music is king and technology is the kingdom for which content is king.

Anghami is a 95% mobile centric platform, which means 95% of Anghami’s users play music from the mobile. As a result, the power of the product of Anghami is in the power of the technology that it lives on. Just imagine how much Anghami has evolved. When Anghami first launched it was on iPhone4 🙂 … we are in 2018 , and with iPhone X , Samsung S9, Huawei P20, Anghami’s evolution from a on-demand music player that connects 60 million users with 30 million songs, 1 million artists and results in 1 billion streams every month, the technology or the kingdom of Anghami has evolved in the past years like Dubai has evolved between 2005 and 2008. Allow me to elaborate.

At Anghami we believe in a world of music entertainment and not just music play, we believe in the marriage of content and technology and the magic that can be created with the beauty of music and the capacity of technology. Premium music from artists loved and followed by music lovers, and mobile technology that has become a part of every day life. So at Anghami, we marry content and technology, and create features that take music enjoyment to the next level .

1- Anghami Expressions, a feature that allows users to create 15 second videos with to any song of their liking. Here is a cool case study on how engaging Expressions is.

2- Sleep timer and Alarm Clock, with a simple gesture, users can snooze Anghami to sleep or awaken Anghami to play music. Here’s another story on how such features came to life.

3- What about connecting the the online world to the offline world, leveraging the camera on the mobile to turn objects to musical playlists. Turning a Pepsi Can into a music player.

Not Only that, users can search for their favorite songs on Anghami using voice command, a future we are very excited about with the introduction and scaling of smart speakers in the Middle East. If you are an Android user, feel free to call on Ok Google and state your Anghami craving without even having to open the app.

Coming soon, is chatting, commenting, Live Streaming, Augmented reality and more artificial intelligence to perfect song recommendations and our bots. This kingdom is the kingdom of entertainment.

Beyond technology, Anghami has a long lasting story in elevating user experiences with Brands, upgrading users to Anghami Plus to provide elevated experiences of unlimited music play online and offline, lyrics, unlimited skips, repeats and more. Promotions, Loyalty programs are but some examples of how Anghami and brands have been partnering up to drive value to users.

In a world of multi screen, offline and online, experiences and messages, Anghami has aimed at balancing it’s presence beyond the screen. Beyond it’s engagement opportunities of creating brand channels such as the below example from Close up.

Anghami has been able to expand the box size (from think outside the box, get it? 🙂 ) and bring together music lovers closer to their favorite artists and brands. Be it by creating a dining experience with Maya Diab, or appearance of Mohamad Assaf at Gitex, or creating a Nassif Zeytoun Concert in Syria or simply leveraging artist album covers on partners ads. Anghami is simply a bunch of humans who love music, have human relations with artists and build human connections with people.

We also have collaborated with brands that share our vision in uplifting the Rising talent community, here is a Anghami Session created with CentrePoint in an ongoing campaign called #ShowYourself that put As Per Casper, who in my personal opinion are The Cranberries of the Middle East to show themselves. In this video you will see As Per Casper perform a song originally in English, in Arabic, and FYI it sounds much much better in Arabic, which from this experience has altered the bands direction to mix Arabic and English.

At Anghami we love what we do, dedication before passion, commitment before hard work. A group of 100 anghaminators dedicated to elevate the experience of music discovery and play. While Advertising is a major source of revenue for Anghami, innovation sits at the heart of what we do, dedicating a team to inspire brands to create engaging experiences that do not interrupt users playing music as much as engaging them to having fun with brands in their music kingdom.

Check out all the initiatives that Anghami has done by creating original content, jamming sessions, interviews and concert coverage and more on this link:

Feel like getting more information, want to run a workshop with Anghami, brainstorm a new feature, get in touch partner@anghami.com and thank you for reading.

“During these tough times” has been on a loop wherever we go, bringing us back to a twisted reality.... 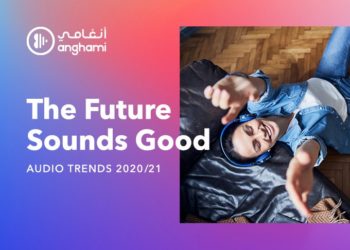 2020 was a stunning reminder of the true power of audio. With change being the constant, agility trumps everything,... 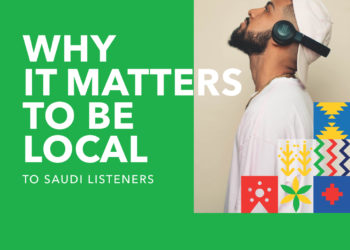 To Saudi Listeners: Being Local Matters

Just like music lovers across the MENA region, Saudi listeners have an infinite appetite for music, with the music...